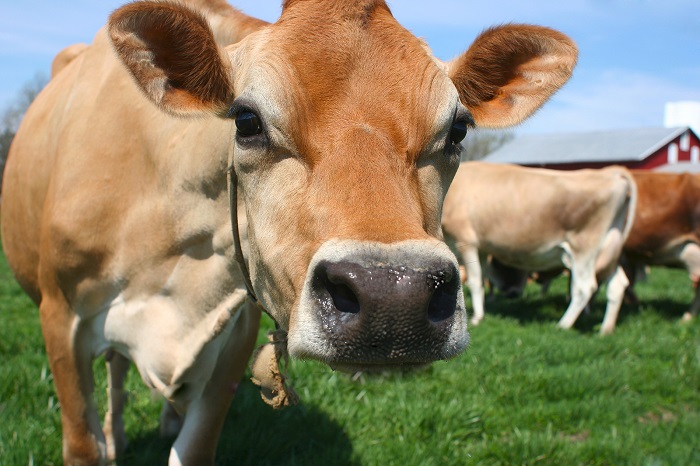 The Jersey is a breed of small dairy cattle. Originally bred in the Channel Island of Jersey, the breed is popular for the high butterfat content of its milk and the lower maintenance costs attending its lower bodyweight, as well as its genial disposition. The Jersey is one of three Channel Island cattle breeds, the others being the Alderney – now extinct – and the Guernsey.

The Jersey cow ranges from only 400–500 kilograms (880–1,100 lb). The main factor contributing to the popularity of the breed has been their greater economy of production, due to:

Castrated males can be trained into fine oxen which, due to their small size and gentle nature, make them popular with young teamsters. Jersey oxen are not as strong as larger breeds however and are generally out of favour among competitive teamsters.

Due to the small size, docile and inquisitive character and attractive features of the Jersey cow, small herds were imported into England by aristocratic landowners as adornment for aesthetically landscaped parks.

Jerseys come in all shades of brown, from light tan to almost black. They are frequently fawn in colour. All purebred Jerseys have a lighter band around their muzzle, a dark switch (long hair on the end of the tail), and black hooves, although in recent years colour regulations have been relaxed to allow a broadening of the gene pool.

Jersey cattle have a greater tendency towards post-parturient hypocalcaemia (or "milk fever") in dams, and tend to have frail calves that require more attentive management in cold weather than other dairy breeds due to their smaller body size (which results in an increased surface area to mass ratio, increasing heat loss).